Are You a Pegboard Jars Organization Fanatic Too? 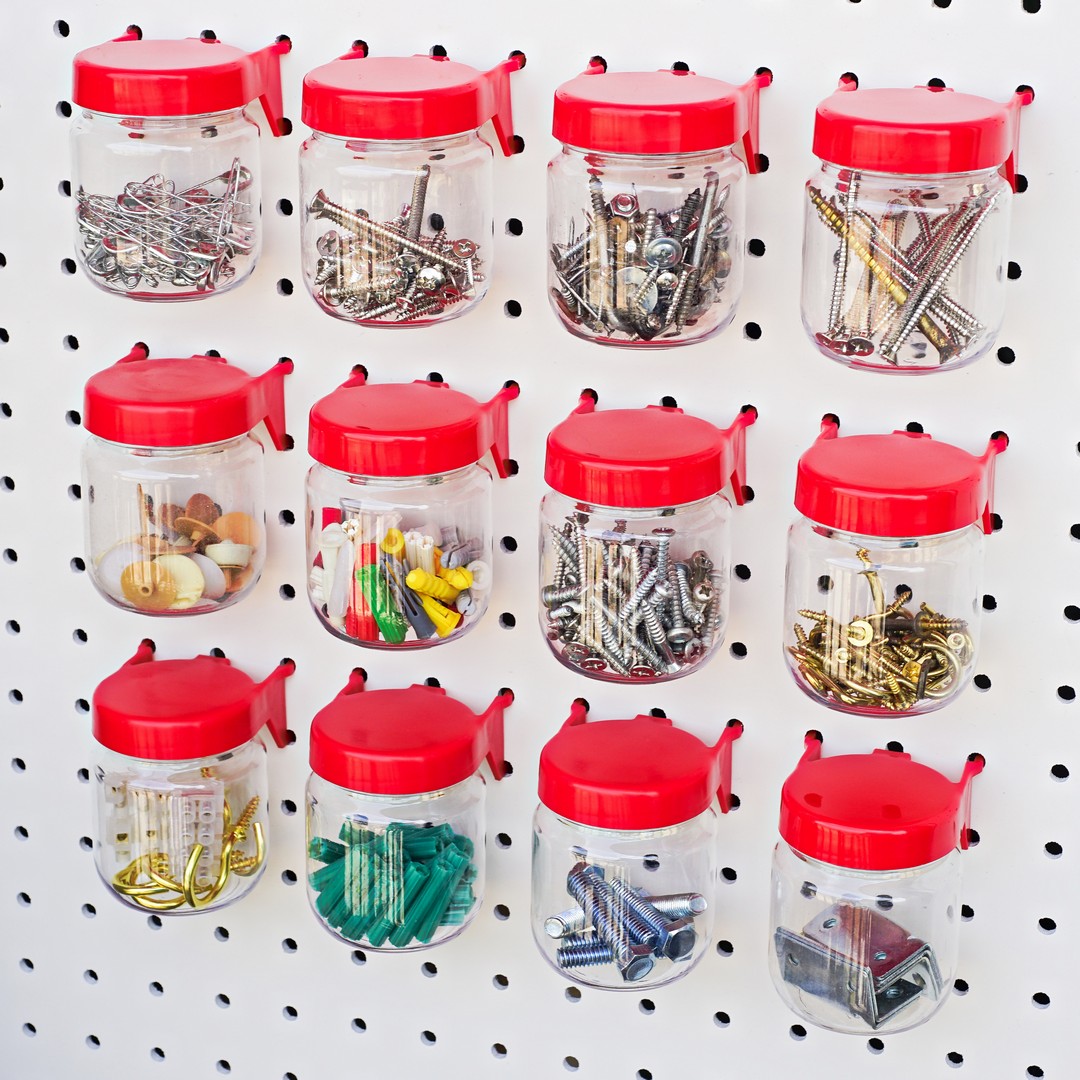 At World Axiom we are pegboard jar fanatics. We find uses for them in every room of the house, in the garage and will also renovate rooms slightly larger than closets just to find a space to put up more pegboard. We’ll then load the pegboard with pegboard accessories that we design, or great products other companies make, and organize everything.

Why do we think our Pegboard Jars are  superior to the others on the market? Let’s take a trip down memory lane to see how our obsession came about.

The History of The Pegboard Jar

Pegboard Jars have been around since the 60s in one form or another. The type I remember the most is the Handy Dandy Pegboard Jar Cap and the glass baby food jars that screwed into them. The first set of them that my father owned was gifted to him after a family friend had passed. I must have been about 5 years old when I went with him to the friend’s garage workshop to pick them up. His garage was full of every type of woodworking machine you could imagine. But what I remember most were the walls and walls of brown pegboard, and the strange pegboard containers sticking out of those walls.

Every jar on the walls was full of a different kind of hardware - screws, nuts, bolts, rubber gaskets etc. I had never seen anything like it.

There was a lot of unscrewing of jars, wrapping jars and trying to get the caps out of the wall without breaking them. If anyone remembers these caps, there was a hook on the top of the cap, in the middle, that held the cap in the pegboard. If you snapped that hook off the cap was useless. They snapped off easily because they were designed to go in and stay in.

The caps were not expensive. You could buy them through an ad on the back of Popular Mechanics (found this out when trying to find replacement glass jars years ago). So when the cap broke people just bought a new stack of these lids.

As the years went on the product was discontinued. The existing jars broke people found the new baby food jars were smaller. The threads on the baby food jars didn't match the caps anymore. Then baby food started coming in pouches, and so there weren't many options left.

Soon you could only find the Handy Dandy caps on eBay, but as time passed the availability of that option became less and less.

Metal Jar Lids and the Wooden Board Solution

Some people began, and still do, to hammer a metal cap into a board and then screw in a jar to hold the hardware. You can nail up a big spaghetti jar cap and then fill up this big jar many, many items.

The downside to this cap and jar option is that if you miss the thread on a jar, and let go of the jar, you have broken glass everywhere, just like the old Handy Dandy jars.

Jars Similar to Handy Dandy Appear on the Market

Several years ago a copy of the Handy Dandy pegboard jar appeared on the market. It was a complete kit, cap and jar. But now the jar was a plastic jar. Great, I thought; I can buy these and replace the glass jars I broke in my father's garage. The color didn't match the original red caps, but that didn't matter. What I didn't know until I bought them was that that, while the plastic jar had the solid feeling of the old baby jars, when I went to unscrew a jar full of bolts and grabbed it as you would the old glass jar, the plastic jar just crushed in my hand. That jar, of course, was useless.

The cap also had the same problem the original caps did, a top hook that broke off easily when you tried to move the pegboard jar. What to do? Time to design something better. Something that addressed all the issues I faced with not just the original jars , but also the copies of the original.

The first thing that needed to change was the locking mechanism. Pegboard storage and organization is not a set-it-and forget-it process. Boards change as new tools are added. Interests also change, and as a result, different materials take priority. So we designed a patented hook, squeeze and lock system that keeps the pegboard jar fixed, but allows it to be moved when needed, and without the worry of the cap breaking.

How do to create the look and feel of the glass baby food jar but with the durability of plastic?

Step 1. Carefully wrap an original glass jar, load it up in bubble wrap and ship it off to have a mold made of it.

Step 2. Test various plastics and settle on PET. PET gives the strength and durability of the glass jar but WITHOUT the breakage problems. Drop a PET jar full of screws and it will just bounce on the floor.

Step 3. Make a whole bunch of samples and see if they pass the father-pegboard-wall test. Success! My dad loved the pegboard jars. They were an improvement on the original jars.  That is when I knew the new pegboard jars were winners!

We also made major upgrade to dad’s garage, replacing the old pegboard with 1/4" white pegboard. But the jars and lids work on both old and new pegboard types!

What about the colors?

A final note. Rebecca, the owner of World Axiom, loves to sew. However, she also wanted a color that would match with her white and pastel accessories and the red jar lids just did not work. She suggested light blue, we had the lids made using this color, and they have been a very well received. We have started with these two colors. Check Out Our Video Below!

We have many more pegboard accessories planned, and look forward to sharing them with you.

Amazing New Canvas Wall Art – Something for Everyone

Gorgeous Garden Wall Art Pieces to Spruce Up Your Home 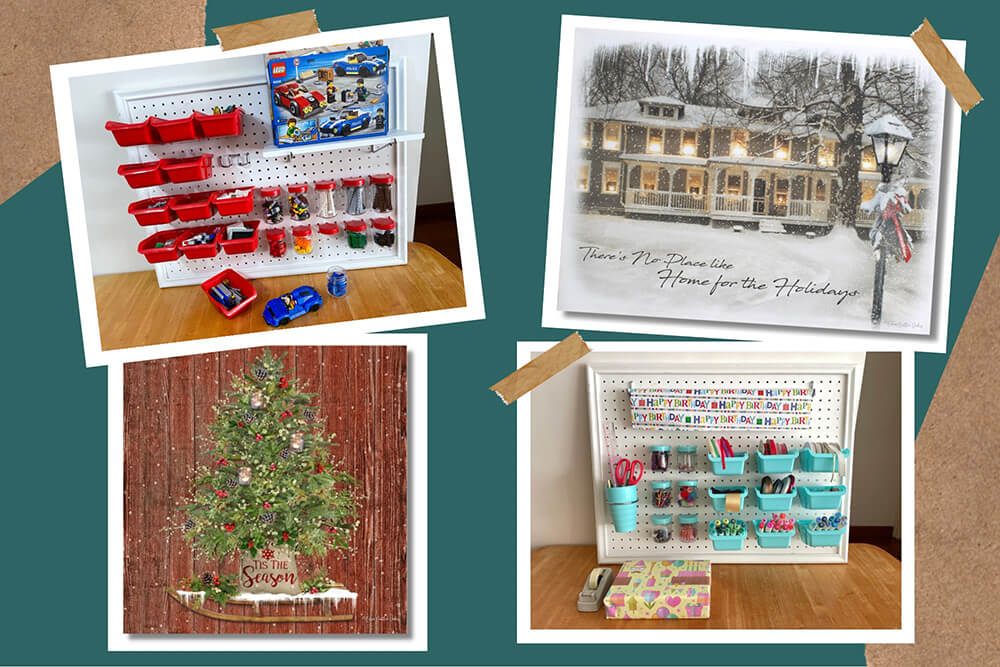